Check back regularly or subscribe for updates. Email us at jandkaudiodesign@gmail.com, or fill in the form on the left.

Hope everyone is doing well out there! It is approaching 2 years since COVID19 outbreak started and yet, our country is experience the 3rd (or 4th, I don't really know!) full lock down to control the spread of the virus. Blame the government? Blame to foolish citizen for our own demise?

Life goes on, online, not in the physical world. Since we can't do much in the factory, we can focus our energy to generate some post to past time. Apologies for those that ordered - we are truly sorry for not being able to churn out the irons on time.

Now let's talk about tubes --> EL86. Huh? Not EL84? Typo? No... you've read it correctly --> EL86. It is a low impedance output pentode suitable for audio use. It is very similar to EL84, just that it has a higher maximum current tolerance and lower Ra or Rp (plate impedance) compared to EL84. The output transformer designed for EL84 may be usable but is not that suitable or optimum.

Why we choose to bring up EL86 instead of EL84? NOS EL84 is quite expensive now and is being used in commercial amplifiers. EL86 on the other hand, is not, and NOS is cheap and plentiful. I myself have collected some for personal usages, such as Mullard, Telefunken or SIemens made NOS EL86, which are such beautiful and excellent sounding tubes. Due to such low price, fake EL86 are rare, unlike fake EL84, plentiful!!! 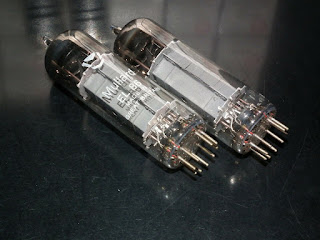 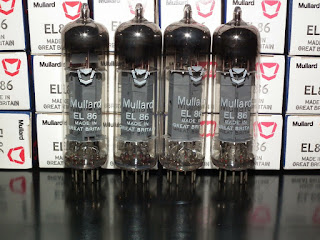 I do not like Pentode sound personally, but luckily, EL86 can be triode connected.
DHTs are pure blood
IDHTs are half blood
Pentodes are muggles
Just joking... Meanwhile...
With the low impedance of 650 Ohm when triode connected, output transformers used for 6080 tubes, or 2A3 tubes, can used. Such 2A3 or 6080 SE OPTs usually have primary impedance of ~1.5K to 2.5K which suits EL86 perfectly. The triode connected EL86 calls for 170Vp with bias current of 74mA, which most SE OPTs happily fits. For connoisseurs, they can custom make SE OPTs for perfect fit to optimize the bandwidth and primary inductance.

For those that needs a bit more power, then can happily purchase more tubes and have PSE or Parallel SE. Exotic NOS EL86 are plentiful anyways, use as many as you like! Also, maybe you can run it near maximum to have even higher power. NOS are made to last and won't be as fragile as modern tubes.

On top of being a power tube, EL86 is a decent driver tube too since it can churn out quite a lot of current for grid current hungry tubes, or large transmitting tubes. Due to the low plate voltage, one may need to use a step-up interstage transformer to get the required V-swing to drive the output tube to full power.

It is not as warm and pure as true triode, or true DHT (direct heated triode), but the tonality is still good, and one gets to play with multiple types of exotic NOS brands such as Telefunken, Mullard, Siemens, and such. They are many, many times better than modern day new production tubes. In addition, we have to mention the jaw-dropped faces of the visitors when they get to know that you're using Telefunkens or Mullards or Siemens that they paid loads of hard earned cash for (I wonder how much ECC802s cost now for real NOS Telefunken) while you just paid peanuts for it, and have another dozens of different NOS pairs in a box as spares.

I'd say, why not! Now, it's time to go back to my den and have a bunch loads of beers to endure the MCO while we can. Nuh, just kidding. We'll still try to catch up with work while we can. Also, we will find another tube to introduce in the next round.

Stay safe everyone and enjoy life.

Level 3: depends on type, size and complexity. Email us for details.

* Finished amplifiers, DACs, audio gadgets, upgrades and repairs - this is not our core business and we do it out of passion. We do not have fixed models, fixed price and we customize for each individuals. The sky is limit of creativity.

* Our product lines are always improving and increasing. If you do not see what you want, contact us!